At a Complete Floss

Nearly two more months have lapsed in 2011, and I need to reflect on my objectives for the year as well as those monthly ones that have seemed to bedevil me (in the teaching world, we call this "monitor and adjust" - that is fancy talk for "what is wrong with you?").

Practicing compassion - well, that's an ongoing project, now, isn't it?  Sometimes, when the toddler has peed on the carpet three times in what seems like five seconds, it's hard to be compassionate with the next person you speak to.  Sometimes, when the dog goes nuts and knocks things over on her way to the door, only to run smack into it (funnier when she hasn't broken things), it's hard to remember that she's just a dog and can't understand your anger and frustration.  Sometimes, when the idiot cuts you off and makes you nearly swerve into another car, it's impossible not to let loose a barrage of words that are totally inappropriate for the two-year-old audience in your back seat about whom you have clearly forgotten in the heat of the moment.  That's why it's called practicing compassion (insert joke about doctors/lawyers and their practices here).  I'm practicing in order to get better.  Some days are easier than others, that's certain.  But I think (anecdotally speaking, here) that I am getting better at stopping myself and thinking for a second before I decide that calling someone a moron is the best decision I could possible make at that moment.  I even had the words "practice compassion" engraved on the last line of my new Road ID.  That way, if I get hit by a car, the moron who did it will know that I was at least trying to be nice.


Using and not losing the veggies - much better success than I had thought, although there have been more leaves of various lettuces that have made their brown, slimy way into the compost bin.  I do think that I had rather grandiose plans to have veggies on the plate every day, but let's be honest.  We all have those days that a peanut butter cookie and the buttered noodles you had originally intended for the toddler are the only things getting put in your mouth, and you are using the cookie as your "source of protein, because it has peanut butter in it."
Yoga...moving on... no, really, I sucked at this one.  No lie.  There's really nothing more to say.
Doing something for myself is proving harder even though in all honesty it should be something I want to do.  I still find myself picking up clothes for HRH instead of myself.  However, I have done the following:


I really really really want to get a massage, though.  I could use one after the spring semester is over. But even doing little things is giving me a sense of "me time."  I started using the oil cleansing method for my face (post to come later), and that is a little "spa" moment that I get each evening.

Of course, I know everyone who reads this blog (hi, Mom) really just wants to know one thing - how is the flossing going????????
I was feeling quite downtrodden after posting my last update at the beginning of March; I had pretty much just written off flossing like I clearly have yoga. I wanted to have a gorgeous gumline but clearly not enough to get off my rear and back into the bathroom.  I was going to be one of those photos that shows kids what happens when they don't floss (ewwwwww).  But then I started cleaning my face with oil each night, and I found myself adding floss to the routine.  Now, before bed each night (except Easter, when HRH flat out refused to go to bed - sugar may have had something to do with it - and I literally passed out from exhaustion while she was jumping on my bed), I floss, brush, oil, and rinse before getting in my jammies and crawling into bed.  I'm at the point now at which my gums aren't bleeding, although I have realized that my lower teeth have clearly moved since I got my braces off many years ago, so I may have to take some corrective measures to ensure I don't end up looking like a mean British stereotype.  I have even had days that I couldn't wait to floss and HAD to get something out of my teeth RIGHT NOW.  In fact, I'm starting to worry that I'm going to turn into Tom Hanks's character in Turner and Hooch.
But don't worry; I'm not a super woman.  Because the vitamin thing has pretty much come to a complete halt.  I take one maybe once a week.  I don't really even care, but that might be because one morning, I was in a really, really, really bad mood, and in my rage, I put my vitamin on top of my peanut butter and toast and ATE IT.  Have you ever eaten a pill that was not intended to be eaten?  There is a reason that you are told to swallow it whole.  It's the same reason that little kids hold their noses and swallow peas whole.  It's disgusting.  To call it bitter is an insult to bitter beer face.  And, it totally did not improve my mood.
I may, however, have found my salvation.  At Target, of all places (Our Lady of the Red Bulls-eye?). 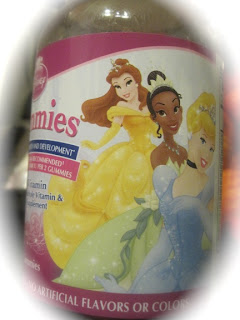 That's right.  Disney princess gummy vitamins.  We bought these for HRH, since she will eat like two healthy things, and we wanted to make sure she didn't get rickets or something.  But the label says that children AND adults can have them.  And they taste pretty awesome.
I'm not going to steal my daughter's vitamin stash (she will actually remind me to give them to her in the mornings), but I think that once I do manage to get through my big girl nasty tasting pills, I'm going to pick some of these up for myself.
Posted by Allison

Email ThisBlogThis!Share to TwitterShare to FacebookShare to Pinterest
Labels: Health, Various and Sundry