Easter, like Thanksgiving, is another holiday on which my husband's family gets together for a large family dinner.  Everyone is in charge of bringing something.  Usually everyone overdoes it.
A family dinner is a wonderful opportunity, even though most people find them stressful.  True, I was in the kitchen all day on Saturday getting our assigned foodstuffs ready, which made me tired and a little grouchy.  That being said, once the burger buns were made, the pie set, and everything unloaded from the car, it was nice to sit, relax, and chat with everyone as the kids ran around.  While I know that no one has a great time with every family member every time, losing integral family members like my dad has made me look forward to the time I am able to spend with my family as well as Scott's family.
Scott and I were charged with:

Now, I do NOT like "regular" potato salad; that much mayonnaise makes me green around the gills.  Since I wasn't given a directive on what the potato salad needed to include, I found a lovely vegan potato salad recipe that used a dill and dijon mustard vinaigrette as the dressing instead.  Thankfully, we still have a ton of dill, so I was able to toss in plenty of that; it really made the salad taste so fresh.  Sadly, though, this brought us to the end of our mustard, so I'll have to be making a new batch of that soon here, too.  I did pick up some potatoes, new and purple, from the store, but I also used the turnip and kohlrabi that we had from our CSA to add a little different taste in there as well.  This one was a success and definitely worth making whatever tweaks I see fit to make this recipe "my own" (I already had to do that, as I discovered a little too late that the bottle I THOUGHT was red vine vinegar was actually malt... so I used apple cider vinegar instead).
The burger buns... um, not so much.  I am having a tough time with my breads lately.  Even though I know my yeast is active, that first rise has just left me - and the dough - a little deflated.  It was a good recipe, and the flavor was nice, so I think that it's worth working on.  I just feel like they were missing on some "fluffy" factor that I was hoping for.  I've got to figure out how to not screw up the fluffy.
Fortunately, the pulled pork was excellent and made up for the buns.  I used the holiday as an excuse to head out to The Pork Shop in Queen Creek.  This place has been around for over 30 years, and all it does is pork.  Any pork product you can think of - including pig ears for doggies! - is sold here.  One can ever purchase half a hog to put in the freezer!  So, I called in my order of one pork butt and four pig ears, and on our way home from the farm on Friday, I made my way out there (it totally was NOT on the way home, but it WAS totally worth the trip).
It smelled divine when I walked in, so much so that while the dude with the most awesome mustache I have ever seen was getting my order, I grabbed a package of pepper bacon from the bacon refrigerator case (I call it that because bacon was the only item in that particular case) to add to it.
Scott stayed up late Saturday night to put the pork in so that it would still be warm when dinner was served on Sunday.  It went into the smoker about midnight (after getting a rubdown that morning that included sugar, salt, and various peppers); he got up around 6:30 to check on it and then went back to bed for a while (while I tried to distract HRH with making bunny cookies, but the promise of presents from the Easter Bunny was finally just too much to bear).  The end result was a fantastic and tender pulled pork that needed no sauce, even though he did bring the last of our East Carolina sauce, just in case. 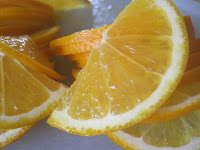 As for the dessert, I wracked my brain to come up with this one.  One of Scott's cousins volunteered to bring lemon cupcakes, so I didn't want to bring another lemon dish (in consideration of those who aren't fans of lemon).  Thankfully, the answer was found on the side of the road.  Literally - as I headed back from The Pork Shop on Friday, I stopped at a stand that was selling oranges and other fruits to grab a bag of valencias.  As I baked the buns and prepped the potatoes, I kept looking at that bag, and I finally determined that I could use the oranges instead of lemons to make a chess pie.  After all, we were having pulled pork - what better dessert for a Southern dish like that as chess pie, right?
If you haven't heard of a chess pie, you are not alone.  These pies, common in the South but not really anywhere else, are basically a custard baked into a pie shell.  The basic ingredients - like in much of Southern cooking - are eggs, sugar, flour, and butter.  You can make several flavors of chess pie; thanks to President Bill Clinton, lemon chess pie is probably the best known one.  But why not an orange one?  And voilà - a dessert was born.
In order to make the overall effect a little prettier, I took another orange and candied the slices.  This turned out WAAAAAAAAAY better than my failed attempt at candied grapefruit peels (who knew that honey could be so disastrous?????), and I even had a few left over that I've been snacking on. 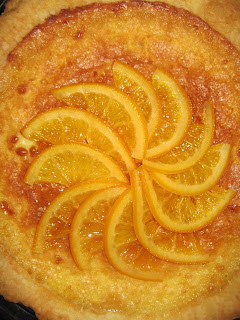 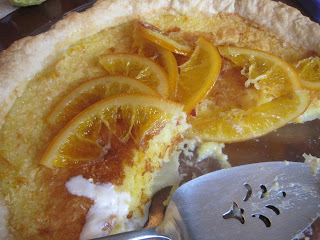 In the end, it was a lovely day that made me appreciate family and food.  Just... next year we have got to taper down.  The amount of food we had was overwhelming, and somewhere not too far, I know there are families who had to do without on a holiday.
Posted by Allison