Real Men Eat Quiche... Because it's Delicious, and Not Just Because Their Beautiful Wives Make it for Dinner

I am a baking fool.  Most of Saturday, I spent in the kitchen, except for the short time that I had to run to the store because my Friday store jaunt did not get two of the ingredients I had on my list, which I had left at home (not super useful).  Of course, I left YESTERDAY'S list at home, too, which required me to ask Scott to go BACK to the store to get one more thing.  I need a sign on my door that says, "Do you have your shopping list?"
But at least when I was in the kitchen I wasn't falling apart.  I made three different cookies for a fundraiser. More on that to come; I have the honor of being a guest blogger at Frosting for the Cause this Wednesday, April 13.  Stay tuned!
I also had to figure out something for dinner.  I wanted to make sure that I used as many of our veggies as possible; we still have some from last week's pick-up, and we got arugula, spinach, AND lettuce this week, so there are a great many items that will get slick and slimy if we don't use them toot sweet.
Thus, last night's menu included not only cookie batter, but also a quiche and glazed root veggies.


I started off with this basic quiche recipe and used what I had on hand.  Here is my recipe, which I am calling "OMG I got more lettuce????" quiche. 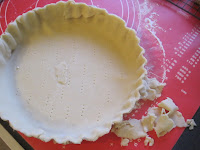 Roll out the crust to fill the tart pan, and trim off excess.  Chill in freezer for 20 minutes.  Then, place immediately into a 400° oven for 10 minutes.  Remove, and cool for another 10 minutes.
Heat olive oil over medium heat.  Add onions and leeks, and cook for about 5 minutes.  Add greens and wilt.  Allow to cool.
Mix eggs, milk, salt, and pepper in a bowl.  Whisk in cheese.  Add greens mixture, and pour into tart pan.  Place in oven and cook at 375° for 40 minutes. 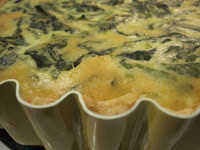 I loved this - I was so hungry (we were lazy all day and never had lunch) that I broke my "no seconds rule" to have another slice.  And after my walk with Zooey (which was cold, by the way - I broke out the gloves AND hat), I had another slice while making my last batch of cookies.

But I needed to do something with carrots, too.  As root veggies, they are hardier than the lettuces, but we had a bunch.  No, wait - we had THREE bunches (do you see what I did there????).  I generally only like carrots two ways: raw or pickled.  Now, pickling was out the question at this late time, and I didn't just want to throw a few raw carrots on the side of the plate (I mean, I could have, as Scott also likes raw carrots).  Since I was already dirtying every dish in the house (the sink is still full this morning), I decided to find something to do with them.
Hence glazed carrots and turnips. 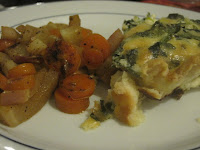 Since I copied the recipe from the site, I won't write it down, but I will tell you that I realized that I had not thawed any of my homemade stock, so instead of the chicken broth, I used water, as I halved this recipe as well (I didn't actually measure the veggies, but I approximated half) and wouldn't have needed a lot of broth.  I certainly think that it could have used a little extra flavor of any stock, although perhaps a little white wine would have done as well.  It was nice to go outside to snip the amount of thyme that I needed.
Posted by Allison